1.suspect 3 because there DNA matches with the crime scenes DNA
2.our gel doesent have any evidence of improper technique because we followed the steps correctly.
3.I would be ok with it because if they have everybody's DNA on record then they have a higher chance of solving crimes.
4.I would be ok with it because then they might be able to learn more about medicine and the world from everyone's DNA. 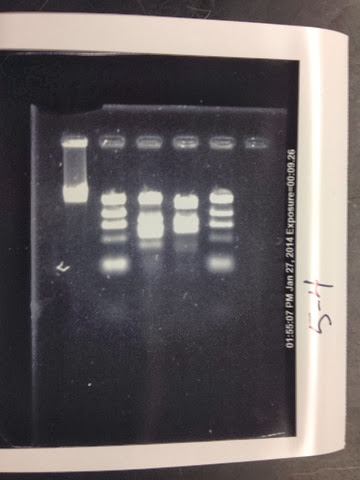 1. Two traits my transformed bacteria should have are they will have gown and now be able to glow in the dark.

2. There are about over 200 million bacteria in the 50ul of bacteria we spread on each plate. I know this because each colony has 1 million so a lawn would contain a lot..

3. The role of arabinose was probably to increase the growth rate of the bacteria.

4. One current application for GFP is using it on tumors to see how it affects their growth.

5. If you didn't get any bacterial growth on your plate you probably did something wrong like not spreading the DNA well enough or exposing your bacteria to bacteria.

6. If you didn't get any growth on your LB + amp and LB + amp + ara like plates like myself and more than half the class is was probably they didn't get the antibiotic resistance gene.